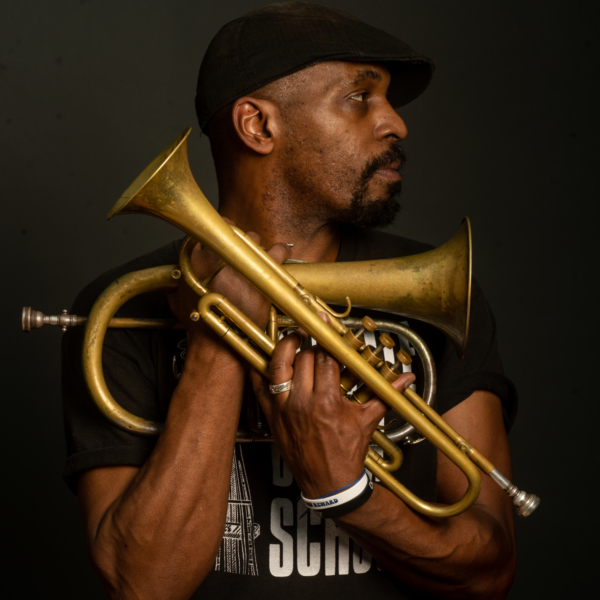 Residing in Seattle with wife Veronique and their daughter Gisele, Chris Littlefield has been a fixture in the Seattle Music Community as a professional trumpet player for over 10 years. Having played in many venues & clubs throughout the NW region, the US, and other parts of the world, Chris has come to be known & well respected as a trumpet player, bandleader & composer. After pursuing his degree in music education & performance at Central Washington University in Ellensburg he moved to Seattle in the early 90’s to begin his career.

It was at this time he began his tenure in the ‘Seattle Groove Scene’, cutting his teeth by playing in many popular clubs such as the ‘700 Club’ & ‘Baltic Room’ and performing with well known bands like ‘Phat Sidy Smokehouse’ & ‘Crack Sabbath’. Performing on just about any night of the week from straight ahead Jazz to Electronica in some Seattle’s longest running club night’s such as “Jumbalaya” & “Das Rut”, Chris became a regular fixture in the dance club landscape.

It was during this period that Chris began honing his talents as a composer & band leader by forming 6 piece Instrumental Hip-Hop Jazz Band ‘Bassackwards’ and 10 piece Soul group “Cornucopia”. Both ensembles provided the trumpeter with a broad canvas for his compositions & arrangements ,a platform for experimentation of sound through the use of effects processors and incorporation of computers for production.

Shortly after the formation of both his groups, Chris’ career was catapulted forward when he joined ‘Cinema/Worldbeat instrumental supergroup’ “Tuatara”. Performing along side Avant-Jazz/Rock saxophonist Skerik, Screaming Trees drummer – Barrett Martin, Los Lobos sax/flute/keyboardist – Steve Berlin, and R.E.M. Guitarist – Peter Buck. In 2001 Chris became side man for almost 5 years to one of the industries funkiest horn players by joining “Karl Denson’s Tiny Universe”, where he toured the U.S. extensively and other parts of the world as well.

Through out all of his career as a musician, Chris has sought one thing primarily in performance and creation of music, and that is happiness. It is this pursuit of happiness in life through music that has led to a great amount of experience and knowledge. It is this cumulative knowledge he brings to bear and hopes to convey in teaching his students. With a belief that playing and learning music is hard work but should be enjoyable as well, you can accomplish great things and still have fun